Check out the latest edition of Chris' first novel: 83 In the Shade. The second edition is now available on Amazon, as well as a Kindle version.  Skylight Books in Los Angeles still has some copies of the first edition (get em' now, they may be collector's items in the future!).  And there are already numerous versions of the second edition.  It's all so confusing; and exciting!

83 In the Shade
Christopher Reidy:
Is from Massachusetts.  He is lucky to have lived through two and a half of the 20th century's most exciting decades!  During the 80's he did a lot of dancing in Boston night-clubs and also managed to go to college at Boston University.  He commuted to school from a town called Saugus which is well know for a lot of roadside kitsch and the first iron-works (which somehow allows the town to claim itself "the Birthplace of Steel").  The man who invented Wonder Woman was born in Saugus; and Chris thinks the town is missing out on a great revenue source.  After college, Chris journeyed to Los Angeles for an exciting and eventful embrace in the arms of Hollywood.  They/them was quite a moody mistress of a place; but Chris wouldn't trade that experience for the world!  He's busily penning his mega-name-dropping-no-holds-barred-tell-all as you read this.  Some of those names? Carol Channing, Henry Winkler, Morgan Fairchild, Ann Miller and Harvey Sid Fisher to name a few!
Chris currently lives in the mountainous Blue Ridge Mountains of Southwest, Virginia.  He does quite a bit of acting in local theater and has appeared in several regional television commercials; including the legendary "Lewis-Gale Emergency Room" spot.  Chris lives with his husband Joseph and their two cats and two turtles.  Chris is also a fully sanctioned citizen of Ireland and plans to visit his homeland soon.

November 2020:
How I Got Into Harvard Without Really Trying

December 2020:
So, Do You Want Long Novels or What?
Mrs. Reidy I Hardly Knew Ye

January 2021:
Be Careful When You Google Yourself

February 2021:
WWUWD (an essay about Walt Disney)
Bloggers Anonymous (includes a movie review of The Little Things).
Memories of Cicely Tyson
In With The Old, Out With the New

March 2021:       T.M./Pat Pend
The Liberated Young Women of Saturday Mornings of Yore
Q and Maybe A
The Night That Changed the World (or was it morning?) (an essay about The B-52's).
Saturday Night Live Needs Seniors!
Massholes, Potato Heads and Yaw Cuzin' From Bawstin
Art From the Artist Part 2
Art From the Artist
Mean People

April 2021:         My Intellectual Property Lawsuit
Mean People Part 2
An Open Plea to Fox TV
When a Whale Isn't Just a Whale
Memories of My Pal Linda
83 in the Shade is Now an E-book (I think)
Spec Jokes

June 2021:          Afraid I'm Naked
Q and A: The Theater
What Life Was Supposed to Be: A Gay Fantasia for Pride
Notes on Pride
I Think I Got It This Time
Time O' the Signs
My Sophomore Novel, 84 on the Floor: A Sneak Peek (the book is finished btw; just waiting for a publisher!).

July 2021:           Career Paths Part 2
Career Paths, Vicissitudes, Makin' It or Not
Prospective and Perspective; Respectively
Talismans (an essay about John Travolta).
Covers to Covers
Men Are From Venus (worries about the environment).

August 2021:     Was Charlie God? (an investigation into the metaphysics of Charlie's Angels).
Celebrity, Celebrity Endorsements
Why I Watch Soap Operas
Celebrity Products You Never Knew You Needed!
Showbiz Chat: The Brady's
TV Notes (a review of the Fantasy Island 2021 version).
Q & Q & Q & A's (a roundtable discussion re: creativity).

September 2021:
Toast of Both Coasts!
Spec Joke #2
Pangolin Pride! (worries about animals).
Let Them Eat Fish Sticks! (more worries about the environment and suggestions for change).
Those Glasses Are Killer! (some thoughts re: "murder shows").
Please Stand By...
What's Your Sign, Baby? (thoughts on fabularian Sagittarians).

October 2021:
Time Out
50 Shades of Fox News (a parody of the work of E.L. James).
Stealing Laughs (a look at comedy theft).
Why Would Anyone Marry a Royal?
Weird Things Found at Discount Stores
Cat-A-Blog (cat "Dad" newsletter).
Nicole Kidman Goes to the Movies: A Spoof
Anyone Can Make A Sitcom! Part 2
Anyone Can Make A Sitcom (a step-by-step creation of a situation comedy out of thin air and paper bags).

November 2021:
Anyone Can Make A Sitcom Part 3 (the script).
Vanity Cahds or A Reply To Chuck Lorre
The World's Oldest Profession & Moi
I Heart New York (but I don't think I'd wanna live there anymore...)
A Letter To Tom Hanks For My Mother

December 2021:
Yet Another Mean Person or Am I Above Pandering? or Myself, The Host and The Little Red Velvet Rope
The Synchronicity of Disco Nikes or Why Does This Person Keep Coming In and Out of My Life?
Anyone Can Make a Sitcom! Part 4 / The Final Script
Blue, Blue, My Mind Is Blue (an examination of the dirty mind).
50 Shades of Fox News / Part 2: Miss Laura the Victorian Spankstress
Is It Me...? (or is my stuff on TV already?).
Why I Wouldn't Make a Very Good Goodfella

January 2022
It's 2022
JAWS! The Musical?
7 Deadly Sins Card (#1 in a series)
Awards Season
My Dinner With Farrah
Does Everybody Love Aaron?
Dear Chloe Fineman

February 2022
What About Natalie and Emmaline?
Things to do When You're Bored (A sing-a-ling to Joni Mitchell's "Free Man in Paris").
A Memory for Black History Month
American Beeotch Company
Singing Shark Flick Flounders in Development Hell
Dear Blackish (or why did you make your father figure felonious?).
Comedy Sketch #1: Lady Bubbles (a spoof of the old Calgon commercial).
Celebrity Love Pass
Hey Hey Hey, Tina Fey-yay-yay!
March 2022
Just What Is "The Male Gaze" Anyways?
Thoughts On The Slap Seen 'Round The World
Jaws!...The Musical!
Celebrity Slut Support (No judgement. Okay, maybe a little judgement. (Judgment?).
That Time I Wore A Onesie
FOX News Ad Campaign
File Under Orwell
The One That Got Away (Thoughts On Adrienne Shelly)
Breakfast Burrito At The Tiffany Network

May 2022
Comedy Sketch #3: Spinning Salad
Red Hot Reidys #1
Even More Technical Difficulties
Red Hot Reidys #2
Bro Woes
Red Hot Reidys #3
Ranking Reidys
An Actor's Diary: Pt. 3
I Just Got A New Roommate!
The Great "83 in the Shade" Giveaway!
June 2022
Grand Funk Railroad
Cat-A-Blog #3
Why Don't...? (an homage to Diana Vreeland)
Synchronicities (Or It's All Connected, Isn't It?)
Dr. Seinfeld: Or, How I Learned To Stop Worrying and Love the Com
We Need to Talk About Woody...Again
Just Callin' 'Em Like I Sees 'Em

August 2022
Please Stand By
Sung Genius (thoughts on Olivia Newton-John)
Gobstopper?
Things You Can't Unsee (like yours truly, twerking)
Practiquemos Nuestro Espanol
Podcasting! Yeah, I Don't Get It...
Road House Re-Make Blues (or, if you prefer, Road House Re-Write)
If You See Something, Say Something!
The Eyebrows Have It!
September 2022
3 Degrees of Reidy-ation
Jaws In 4-D
An Actor's Diary Pt. 4 (Oh, Wait, or Is This One #5? I Feel Like I've Been Doing This G-D Play Since My Voice Changed...)
Pop Culture Analysis: All's Not Well That Ends All Too Well (Or A Little Ditty 'Bout Jake and Ms. Swift)(?)
A Little Ditty 'Bout Jake and Taylor: Part 2
Let's End It All (Too Well): Jake and Tay-Tay Pt. 3
Move Over Harvard (Wink, Wink!)
October 2022
Dear Chloe Fineman Pt. 2
Meet Maggie Slater or (Taylor Who?)  A video
What, Me Worry? Well, Actually, Yeah.  I Have OCD
It's Official! I'm Butch!
Butch Too: Fantasy Football Fantasies
An Actor's Diary: The Final Chapter
Football: Share the Fantasy
Disney Sit-Com-A-Nomics
Daddy...Are You A Zaddy (an essay re: Christopher Meloni and his armpits).
Link to 83 IN THE SHADE on AMAZON.COM :
http://www.amazon.com/s/ref=nb_sb_ss_c_0_6?url=search-alias%3Dstripbooks&field-keywords=83+in+the+shade&sprefix=83+in+%2Caps%2C168 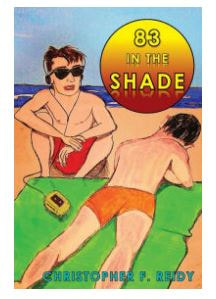